The humid dog Days of Summer 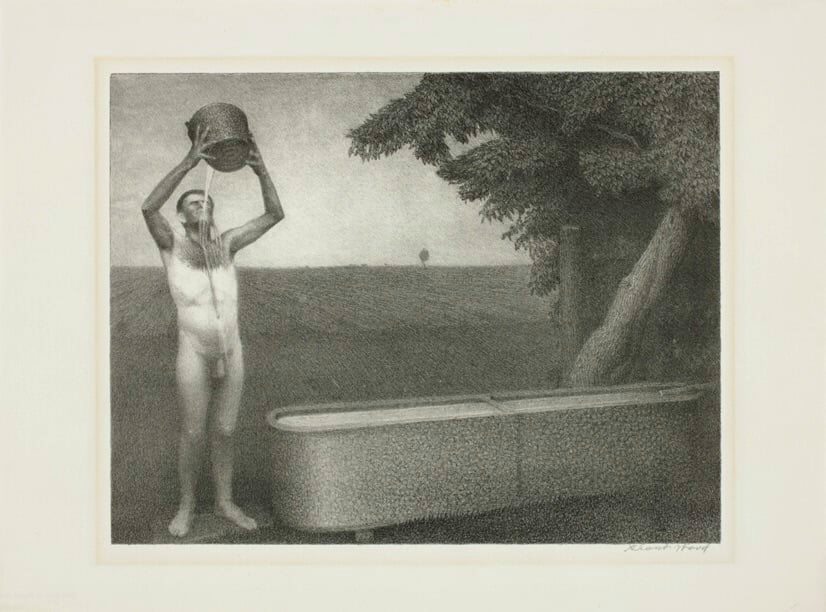 The humid dog Days of Summer have seldom been rendered more memorably than Grant Wood’s lithograph “Sultry Night” (1937), issued by Associated American Artists, New York. The AAA, founded in 1934 by enterprising dealers Reeves Lewenthal and Maurice Leiderman to promote American art and artists during the Depression, sold limited edition prints (usually in runs of 250 and priced at five dollars each) by mail order through catalogues and magazine advertisements.

Wood’s lithographs, mostly homespun views of contemporary farm life in the American Midwest, were especially popular with the public.  In 1937 Wood produced “Sultry Night” as another scene of farm life for the AAA, describing  it as inspired by a warm memory: “In my boyhood, no farms had tile and chromium bathrooms. After a long day in the dust of the fields, after the chores were done, we used to go down to the horse tank with a pail. The sun would have taken the chill off the top layer of water. We would dip up pails full and drench ourselves.”  Wood was a deeply closeted gay man, and I can’t help but think this outwardly innocent depiction of the lanky, rather well-endowed farmhand  – the only nude he ever did – was an unconscious way of coming out. The sensuality of the nude aroused the ire of the U.S. Postmaster General, declaring “Sultry Night” obscene, banning any marketing or sales of the work through the U.S. mail.  To the credit of the AAA, they issued the “Sultry Night” anyway with a reduced run of 100, which could only bought directly from the AAA galleries in New York.

I only recently learned that Wood also produced a painting of the subject on masonite, which he submitted to the Carnegie International Exhibition in Pittsburgh. The reviewing committee, unsettled by the unidealized full-frontal male nudity, rejected it, returning it to the frustrated and dejected artist, who sawed off the   farmhand and burned it, leaving just the lonely water trough and tree. I can’t help but feel this must have been one of the saddest moments in Woods life.